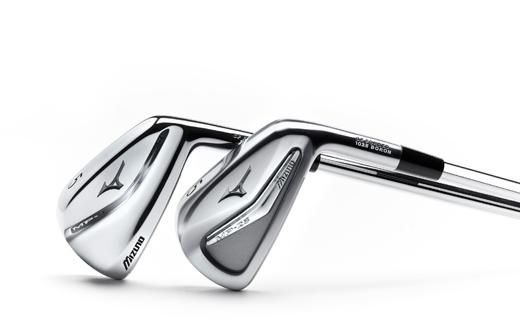 Mizuno, the Japanese golf equipment manufacturer long renowned for its beautiful, industry-leading forged irons and wedges, has reported record first-month sales of its recently launched #boronfuelled MP-25 iron, along with strong sales of the MP-5 iron and S5 custom wedge.

Mizuno, founded in Osaka, Japan, in 1906, has long held an enviable industry- and tour-wide reputation for crafting the very finest forged ‘players’ irons’ on the market – clubs that offer the ultimate blend of looks, feel and workability. For many years, the brand’s highly acclaimed MP Series irons have been the club of choice for many of the world’s greatest players, and the best players at club level too.

Now, the latest members of that illustrious MP family – the MP-25 and MP-5 irons – have broken new ground for the brand, prompting an unprecedented reception among retailers and consumers to the #boronfuelled MP-25. That reaction has, in turn, translated into phenomenal early sales success for the stunning MP-25 irons, MP-5 irons and S5 wedges, with the MP-25, featuring #boronfuelled technology, becoming Mizuno’s fastest and best-selling iron ever in its first month of sales.

“These are exciting times for the brand,” Rob Jackson, Mizuno’s Head of Golf EMEA, enthused. “We have just enjoyed our best launch month sales ever for both custom irons and also wedges, and we are delighted that the advantages of boron fuelled technology are really striking a chord with our retailers and customers.”

The hugely popular JPX 850 Forged was the first Mizuno iron to boast #boronfuelled technology, with the strength of Boron relative to steel allowing thinner clubfaces that paved the way to faster ball speeds at impact. The MP-25 now brings the proven ball speed advantages of #boronfuelled technology to the MP line-up for the first time in a compact Boron forged iron that blends a tour-inspired design with an injection of Boron for added ball speed and distance. The MP-25 is the first true high ball-speed iron designed specifically for tour players through to low/mid handicap amateurs.

Rather than cramming distance technology into the smaller shell that better players prefer, the MP-25 starts from a tour-dictated head profile, with engineers ingeniously adding in ball speed via that injection of Boron. This allows a Micro-Slot pocket cavity to be engineered into the longer irons (from 3- to 6-iron) for greater ball speeds, while still delivering the feel and touch that tour players demand.

The classic MP-5 then introduces a new #channelback design into Mizuno’s ultimate players’ iron series, sitting neatly between a classic blade and a shallow cavity. The Channel Back retains sufficient thickness behind the central impact point to deliver the blade-like feel that better players crave on pure strikes, while allowing some clubhead mass to be relocated to areas where it can tangibly increase stability and off-centre performance. The head may be larger than a traditional blade, and the top line a little thicker for a more powerful look, but Mizuno’s skilled craftsmen have cleverly retained the sense of proportion and shape needed to suit the eye of better players at address.

The new S5 wedges have been precision-engineered to “spin a little Blue Magic” into golfers’ wedge play courtesy of a stunning new Blue IP finish that will wear over time without reducing the durability of the plating. S5 will also be available in Mizuno’s ever-popular White Satin finish. The new wedges boast an enticing midsize profile, with sharply visible and highly versatile sole grinds – as advocated by Luke Donald – that are expressly designed to fuel the golfer’s imagination and creativity around the greens, keeping all options open from a wide variety of lies. A slightly more rounded leading edge then allows the wedges to be opened or closed while still aligned to target for maximum adaptability.

From an original spirit and desire to “go and create the best products for consumers”, Mizuno has become recognised the world over as the clear leader in golf club forgings, with its Grain Flow Forged irons still manufactured in Hiroshima, Japan, by the brand’s Yoro craftsman. The record-breaking new MP irons and S5 wedges promise the best performance benefits that modern technology can bring, while still adhering to the spirit and desire that the brand has held so dear for nearly 110 years.

For further information on the MP-25 irons, MP-5 irons, S5 wedges and Mizuno’s full range of golf equipment, apparel and accessories or to find out why #NothingFeelsLikeAMizuno visit: golf.mizunoeurope.com.