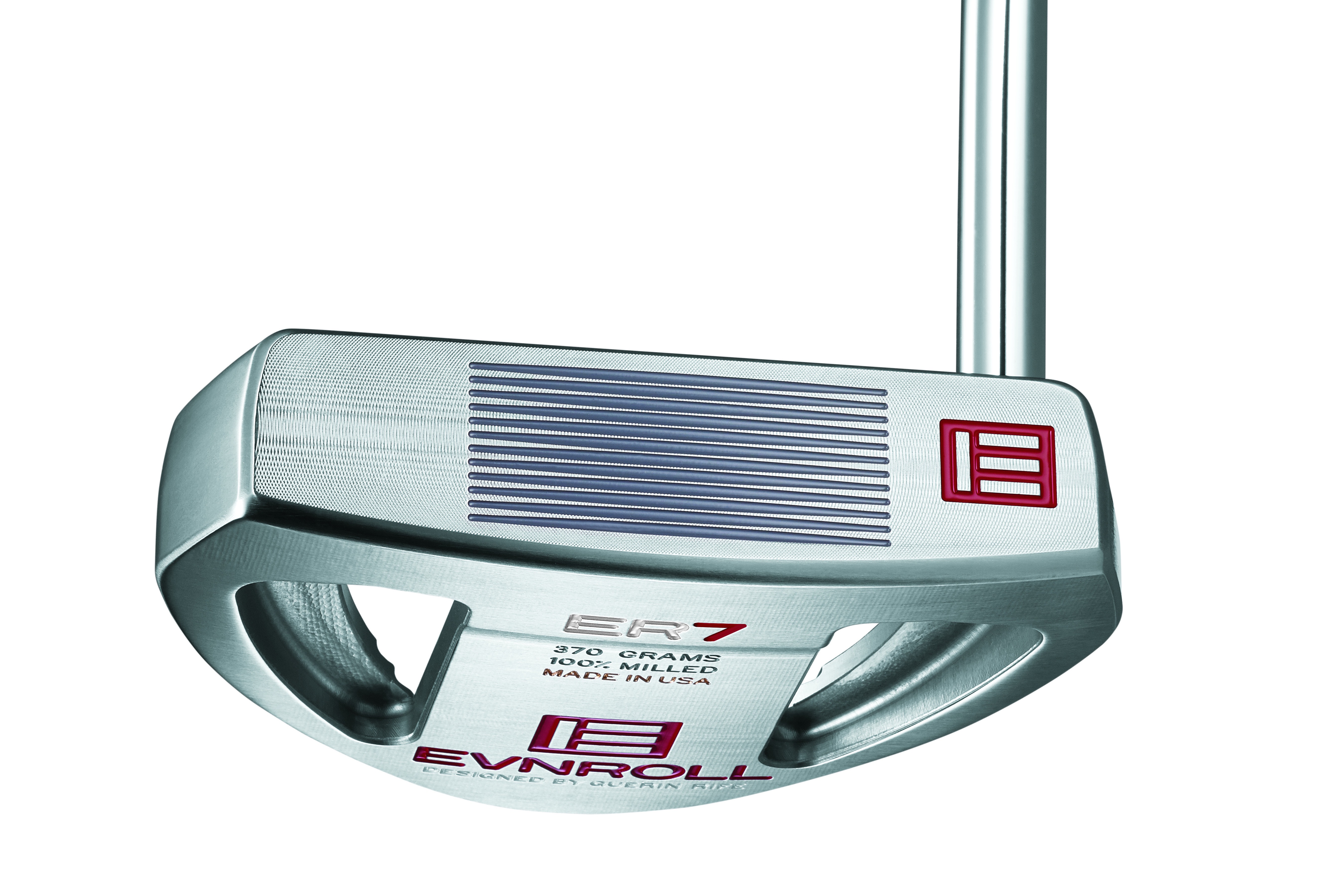 Evnroll putters first burst on to the scene at the 2016 PGA Merchandise Show in Florida with the promise of a better roll for golfers everywhere thanks to ‘The Sweetest Face in Golf’ – a face featuring an innovative and unique mill pattern engineered to deliver uniform performance across the entire hitting area of the putter face for unprecedented accuracy and zero dispersion.

The ER3 Wing Blade features a dramatic flare to the heel and toe that gives its head a distinctive “wing” shape. Positioning mass away from the center in this way produces an effortless stability that enhances confidence. The ER7 Full Mallet features three prominent center sightlines surrounded by a symmetrical distribution of weight that flows gracefully back from the heel and toe. These connect to the center alignment section by way of three milled parallel steps that give the entire putter a sense of motion toward the target. The ER8 Tour Mallet is then a slightly more compact heel-and-toe weighted mallet with a solitary white sightline on top, boasting the same Silver Satin finish as 2016’s ER1 and ER2 blade models.

All three new models – CNC-milled from a block of 303 stainless steel and hand-finished in Carlsbad, California – feature the full array of performance-enhancing technologies found on all Evnroll putters.

The precise face milling on each Evnroll putter imparts progressively more energy transfer on off-center hits to roll the ball a consistent distance with every stroke. So with an Evnroll putter, golfers can roll center and off-center putts the same distance to the same spot. “This is by far the most performance-enhancing technology I have ever brought to market,” said Rife at last year’s Evnroll launch, some 20 years after first introducing face grooves to putters.

Each design also includes new LineAlign technology, which features two small, unpainted dots on the topline 1/8 inch either side of the centre cavity sightline. “This provides the golfer a subtle alignment reference for consistent lie angle positioning, while also helping with alignment on breaking putts,” added Rife. Aligning the ball in front of the toe-side dot on right-to-left putts and in front of the heel-side dot on left-to-right putts will help keep the ball travelling on the high side of the target line as 90% of breaking putts are missed below the hole.

The revolutionary Evnroll putters earned a glowing ‘Best of the Best’ accolade in a putter test conducted last year by MyGolfSpy.com, the independent testing and review website, considered by many as the Consumer Reports of Golf. MyGolfSpy lauded Evnroll as “The best-performing putter we’ve ever tested,” adding: “This new ‘Gearing Technology’ is a game-changer.”

The ER3 Wing Blade, ER7 Full Mallet and ER8 Tour Mallet join four original head designs in the Evnroll line for 2017, from the classic style of the heel-and-toe ER1 and ER2 blades, to the ER5 Hatchback mallet. The rear center-weighted ER6 iRoll full mallet, originally available in a distinctive deep red anodised aluminium finish, will now also be available in classic black, with both models featuring three white sightlines on top for 2017.